.
I thought Brad Warner made a pretty good observation when he wrote on his blog:

Everybody loves a lynching. Even you. Trust me. You do. (Yes, I’m talking about you.) So when we find someone who falls into our own personal category of “lynchable” we are ready to go after him. 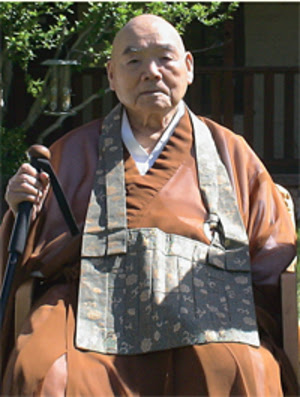 The comment arrived in the wake of the supermarket-tabloid advertisements that Warner seems to list with every post -- events, get-togethers, talks, etc. His brisk and sometimes boisterous style of writing makes the advertisements less sludgy than most and he has a nice and unpretentious way of offering Zen possibilities ... which, in this instance, touched on the sexual foibles of the 105-year-old Joshu Sasaki Roshi and his 'outing' on Sweeping Zen by Eshu Martin.

Everybody loves a lynching. Of course a literal lynching might be too much for the Buddhists who like to imagine their own tender-heartedness, but metaphorically speaking ... well, there is in fact this triumphant voice that growls, "hang 'em high!"

My guess lands somewhere in the realm of the love-hate relationship anyone might have with the icons of their lives. And the greater the adoration, the greater the blood-lust when it arises.

Icons limit and what limits chafes. Most of the time, the chafing is put on the back burner because the love is so compelling. But when, for whatever reason, that love seems to have been betrayed, then all the previous chafing kept on the back burner comes rushing back like an avalanche gaining momentum and power ... roaring for redress and repentance and a return to earlier, more loving, times.

Everyone loves a lynching.

Everyone loves an icon.