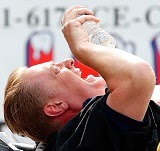 It hardly requires a rocket scientist to imagine the sort of fear, horror, anger, vulnerability and helplessness that erupted after last year's Boston Marathon bombings. The bombings, which killed three and injured something short of 250 others on April 15, 2013, erupted towards the end of a peaceable gathering. Some were running the race, some cheering them on, and some just watching. There wasn't a mean bone in its body.

The confusion and inhumanity of it all were tremendous. It was viscerally detestable and resulted in one of the biggest -- and to some degree most frightening -- manhunts the U.S. has ever seen. Two men, one of them dead, were eventually pinpointed as the perpetrators.

Peaceably going about your business when all of a sudden, BOOM! The visceral and utterly-human revulsion was palpable and did not require the refined sensibilities of a rocket scientist. If the event were to be stamped with a single word, perhaps that word would be "no!"

It was all too vile for speaking, though there was plenty of speaking to follow, as for example the commemorations that occurred yesterday in Boston.

In such a moment, humanity kicks in. Philosophy is sidelined. No one wants to feel this way. It's all too grotesquely stupid and cruel. Anyone knows that.

And yet the anguish that is so simple and so clear and so compelling at the Boston Marathon ... where is it in Afghanistan or Pakistan or Iraq? Does this require a rocket scientist? What is the difference between a woman drawing water from a well who is shredded and then casually designated as "collateral damage" and a runner or onlooker in Boston? Is the visceral humanity in Yemen or Libya or Syria really a separate issue? How is it that the dots that are already connected -- viscerally, in a single BOOM -- need connecting?

Or, if 'them foreigners' allow the mind to keep its distance, how about the young men and women -- fathers, mothers, sisters, brothers, sons, daughters -- sent out into a viscerally repugnant environment to endure day after day of what in Boston amounts to a clarion "no!"?

Are my tears to be distinguished from the tears shed where the world goes BOOM?
Posted by genkaku at 9:17 AM