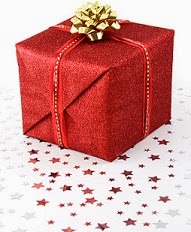 -- Just because the Christmas present is beautifully wrapped does not mean the present itself is somehow changed. And all of that twinkling, beckoning, wondrous presentation needs to be unwrapped before the usefulness and enjoyment of what is inside can come to life. Maybe that's spiritual adventure and effort in a nutshell ... beautifully wrapped ... beckoning ... waiting to be unwrapped ... and all the honest  enjoyment hidden until the wrapping is removed.

So, however beautiful the wrapping ... still ... unwrap your life.

-- Etymologically, aspiration, that realm of hope and striving, comes out of the Latin "ad" (to or towards) and "spirare" (to breathe). People 'breathe' their wishes into the universe, gather their energies and strive. Hope infuses -- sometimes fiercely infuses -- the breath, the aspiration.

But I wonder if it is worth noticing that aspiration, which sometimes receives a rousing round of applause, always seems to relate to something else, something not yet in hand, something 'over the rainbow.' What happens to the place on which I stand when my aspirations are conceived or fulfilled? Is it consigned to some forgotten scrap yard and allowed to rot richly like carrot tops on the mulch heap?

Maybe wishing to be 'there' is a good idea. I don't know. But what happens when I wish to be "here?" Is that an aspiration -- since I am already here -- or not? It sort of reminds me of Beatle John Lennon's, "Life is what happens to you while you're busy making other plans."

-- It is not an attractive characteristic, but I will admit I have been prey to it -- being in some gathering where I felt like "the fox in the hen house." When it came, the smug sensation was most notable when, as a purported Zen Buddhist, I found myself in a setting among Christians. The hopes and beliefs  of the gathering seemed, based on my experience, to be like shooting fish in a barrel. These people were off the mark that I felt myself to be on and ... well ... I could sense a smugness composed of equal parts of "poor bastards" and, fox-fashion, "lunch is served."

These days, I can feel somewhat the same among Buddhists.

As I say, it's not terribly attractive -- wondering how much happier these people might be if only they shared my deepest conviction ... the belief and hope might be good starting points but simply could not hold a candle to the experience that was anyone's god-given right. Hope and belief simply could not go the distance in the matter of peace. I could feel the smugness purring.

And yet woven into this smugness was always some small doubt. These people -- these "others" -- seemed to function perfectly well without sharing my conviction. They moved and talked and laughed and cried and were convinced without so much as a single backwards glance. How could that be? Why couldn't/didn't they see that my conviction was their only hope?

It was a wee doubt, but it nagged. Smugness has a wonderful way of papering over nagging doubts. Until, of course, the smugness runs out of steam as it seemed to yesterday when the doubt took its leave and left in its stead ....

Everyone is a fox in everyone else's hen house. Right and wrong have nothing to do with it. Your fox in my hen house. My fox in yours. And both of us fish in a barrel... easy targets for anyone who chooses to shoot, but shooting fish in a rain barrel does not seem very sporting ... or much real fun either.

I admit that I sort of miss the smugness. I miss it, but not that much.
Posted by genkaku at 8:36 AM