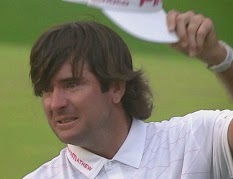 -- I suppose others may think watching golf on TV is about as exciting as watching paint dry, but I got caught up in the Masters Tournament yesterday. The closer it got to the end, the more it was apparent how damnably difficult a strong mind is.

Bubba Watson came from behind, won the tournament ... and cried.

All the discipline of holding reactions in check, of keepin' on keepin' on, of digging deeper and deeper, of not surrendering to bits of bad luck or good fortune ... and then, finally, all those finely-tuned and much-exercised muscles could let go. It was beyond anything like "winning."

I was close to tears myself and I don't even like golf much.

It reminded me of times when I would go to Rohatsu sesshin -- a pretty energetic Zen Buddhist retreat of seven days. At the Zen center I attended, the retreat ended with the playing of Beethoven's Ninth Symphony. And invariably, that was my cue and the tears would run down my face.

And woe betide the analyst who attempted to say 'why' that happened! It was beyond victory or defeat, beyond relief or release, beyond even "beyond." Tears.

-- In Utah, seven dead babies were discovered in cardboard boxes in a garage and the 39-year-old  mother has been charged with six counts of murder. No one is quite sure how such an event might occur without anyone's taking notice ... or shedding tears.

Funny how tears don't come.
Posted by genkaku at 9:35 AM