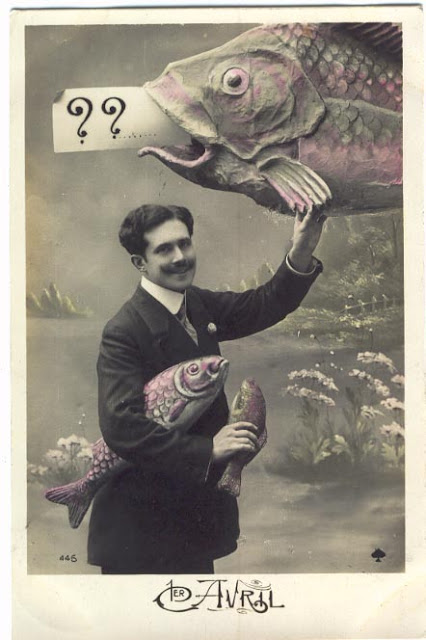 Things are more cushy and cushioned these days, but I grew up in a time when people were expected to use the brain cells God put between their ears.

April Fools Day was a time to trick and be tricked. One of its useful lessons was that a man or woman who cannot learn to laugh at his or her own gullibility has got a first-class fool for a companion.

Nowadays, we're ever so much nicer, kinder, gentler ... and, I wouldn't wonder, more foolish. Hints and clues and footnotes are offered as a way to let the gullible off the hook. The word "stupid" is somehow not acceptable, however bare-assed stupid any of us may be. The result is that the deliciousness of a tall tale is consigned to the same mediocrity that Hershey brings to the bars it calls "chocolate."

Is a tall tale worth a bruised ego? I think it is, even when -- or perhaps especially when -- it's my own.

Oh well ... here's one of my favorite tall tales in (repeat performance) honor of April Fools' Day which, if you haven't noticed, is today. No author is mentioned on the Internet ... and I can't find my own creation about the shooting of a Spam Animal in Maine, so ....

Yesterday I was buying a large bag of Purina dog chow for Athena the wonder dog at Wal-Mart and was about to check out.

A woman behind me asked if I had a dog. What did she think I had, an elephant? So since I'm retired, with little to do, on impulse, I told her that no, I didn't have a dog, and that I was starting the Purina Diet again.

Although I probably shouldn't, because I'd ended up in the hospital last time, but that I'd lost 50 pounds before I awakened in an intensive care ward with tubes coming out of most of my orifices and IVs in both arms.

I told her that it was essentially a perfect diet and that the way that it works is to load your pants pockets with Purina nuggets and simply eat one or two every time you feel hungry and that the food is nutritionally complete so I was going to try it again. (I have to mention here that practically everyone in the line was by now enthralled with my story.)

Horrified , she asked if I ended up in intensive care because the dog food poisoned me.

I told her no; I stepped off a curb to sniff an Irish Setter's ass and a car hit us both.

I thought the guy behind her was going to have a heart attack, he was laughing so hard!
WAL-MART won't let me shop there anymore.