She's nine years old, but that appears to be the only thing critics can aim at Hilde Lysiak. 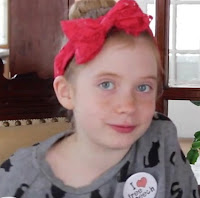 A Guardian story recounts the tale of Lysiak's news story that zeroed in on an apparent murder in Selinsgrove, a "town about 150 miles (240km) north-west of Philadelphia." Critics seemed to feel that Lysiak, whose father once worked at New York's Daily News, would be more realistically employed if she were playing with dolls.

Posted in Lysiak's Orange Street News under the Internet headline, "Exclusive: Murder on Ninth Street," Lysiak's story is hardly gory or salacious, although the murder was allegedly committed with a hammer.

Several things draw me to the story:

1. Funny how a 'run-of-the-mill' murder might hardly raise an eyebrow if it were reported by some adult and yet suddenly there are caring detractors and supporters when it is reported by a little girl. Why, if the Internet, television and print media are full of this stuff, should a nine-year-old be unaffected, uninterested, or somehow 'innocent?'

2. Funny how the Guardian, which reported Lysiak's adventures, should not see fit to contact the relevant officials to find out what it could about the alleged crime. Was there a murder? Was there anyone in custody? What were the circumstances and particulars that Lysiak either was not made privy to or left out? Isn't such an oversight by the Guardian a good example of why nine-year-olds need to take matters into their own hands?

3. How did Lysiak get from her home to the scene of the alleged crime?

4. Is there some reason to suggest that however flawed Lysiak's news story might have been, it was not significantly less solid than some of the news reported by grown-ups in money-making publications, whether local or international? Self-congratulation is easy. Excuses are easy.
Posted by genkaku at 8:23 AM