the limits of well-remembered history

"If memory serves...." the thoughtful person might begin. And yet no one balks, no one calls out this softly insistent suggestion. The fact is that when it comes to serious matters, memory does not serve. No one, I suspect, is ever fully or even well-served by the recollections of others. 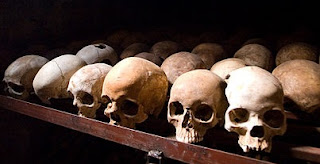 The American philosopher George Santayana once observed that "those who do not remember the past are condemned to repeat it." The implicit chiding of this remark is often regurgitated as a means of disparaging the thoughtlessness of those dwelling in the present.

To my way of thinking, this is not only unkind, it is also flat-out wrong: No one remembers the past with enough effectiveness to sidestep the repetition by others of mistakes once made. Remember it or don't remember it -- the repetition is written on the human DNA. The statement implies there might be another, more sensible and peaceful outcome associated with the recollections of the past as they are passed along. Nothing could be further from the truth and pretending otherwise is arrogant and unwise.

Does anyone remember the Holocaust of World War II in ways that can short-circuit future genocides of a similar sort? Jews may claim such recollections do change the course of history, but I think they are whistling past the graveyard. The horrific nature of events suffered by others is simply not sufficient to inform and forestall the present and its desires.

Does anyone remember the slaughter of the Armenians at the hands of the Turks?

Does anyone remember the rape of Nanking?

Does anyone remember the Rwandan genocide?

Thoughtful and caring minds may leap into the fray and assert that the horrors are fresh at hand -- and then retail a laundry list of particulars that seems to indicate that later generations are not remiss. "Yessiree -- we remember. Yessiree -- we care." Having read the books and studied the history, it is beyond the human pale to imagine such depredations could possibly be repeated. We learned our lessons and will most emphatically NOT repeat them.

And then they are repeated.

But laying claim to understanding based on history cannot clear the bar of human experience. I think it would be more honest to put George Stantaya's (and his somewhat arrogant supporters) on the back burner. Of course people are going to repeat history. It's one of the things they do best/worst. Anyone who lays claim to not being a fool or an asshole has yet to examine his or her own foolishness ... or asshole.

Best to be a little gentler when assessing the human tableau. Yes, you and I and anyone else are bound to repeat history, mistakes and all.

If there was anyone who was a bit closer to the truth than Santayana, I think it was probably American humorist Will Rogers:

Leave aside the "reading" and much of what passes for "observation," and I think Rogers is pretty much right.