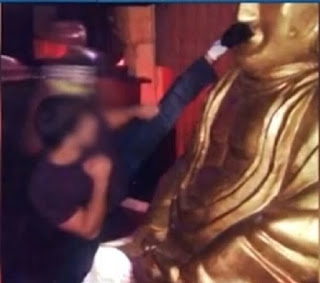 A Russian wrestler faces jail after kicking a statue of Buddha in the face, urinating on it and broadcasting the whole episode live on the Periscope app.
Said Osmanov, 22, from Dagestan, appeared to urinate on the statue, in Russia’s largely Buddhist region of Kalmykia in the country’s south-west, before aiming a high-kick at its face.

If only eliminating or elevating religion were as easy as kicking statues or building/burning temples.
Posted by genkaku at 8:40 AM