Old fogies are likely to know the feeling -- waking up in a hospital bed after an operation (now referred to as a "procedure") of which there is no memory. What happened and how did it happen? There is no especial pain, but the surroundings make their point: Some sort of healing is in the foreseeable cards and what is not pain just now is likely to raise its head as time goes by. The environment is threatening by its very sterility. 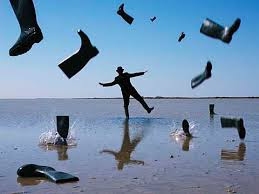 Hospitals have a coffin-like feel and implication. Nurses come and go and are up-beat, but what the hell, they're not the one's lying in the winding sheets. Who knows: Maybe they're right. Maybe things will indeed be better. But it's not at all clear what "better" is supposed to feel like. In the end, old fogies lie still and hope that whatever disfiguration the operation addressed will in fact heal. But it is confusing and too sterile to be true. If you stay still enough long enough, maybe someone will come in and explain what is going on. There will be a "new normal" to ingest and digest.

The new normal: Donald Trump is the U.S. president in waiting. The nurses are upbeat, but it's not clear exactly what is going on. Was the operation a success? A success at achieving what? If you lie still enough long enough, perhaps someone will explain. The lick-spittle media missed the call by miles and yet prattle on as if their credibility had not been compromised.

The new normal: Donald Trump, a man who never held public office and yet has inspired millions with his unkind rhetoric ... well, the new normal feels to me like the Somali security officer's observation about piracy off his shores:

Trump's election day win sparked protests yesterday among those proclaiming with placards, "Not my president." If Hillary Clinton had won, would things have been different? So many things seem to be ripped and torn and the old fogie lies still as salt, waiting for some explanation of what the procedure had been and suspecting that such an explanation will not be forthcoming.