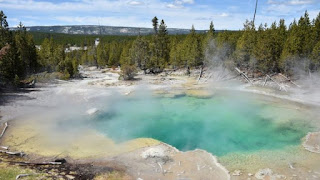 The New Jersey Pine Barrens, long the reputed last and secretive resting place of obstreperous mafia-linked individuals, appears to have received some serious competition. Whereas the Pine Barrens stretches across seven counties and may be a wonderful place to lose a corpse, still there is the off-chance that the remains might be found.

A thermal pool at Yellowstone appears to have totally or near-totally disappeared 23-year-old Colin Scott.


[Scott's sister] was recording a video of her brother on the phone as he reached down to test the water, before he slipped and fell in.
Authorities did not share the video, or a description of its contents, out of sensitivity to the family, the report says.
Rescue teams later found his body in the pool but abandoned attempts to retrieve it due to the decreasing light available, the danger to themselves and an approaching lightning storm.
The following day, workers were unable to find any significant remains in the boiling water.

I wonder to what extent, if any, the toilet cleanser Ty-D-Bol feels itself to be under threat.
Posted by genkaku at 5:28 PM