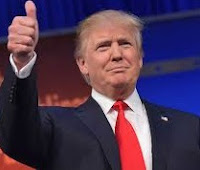 Across the street this morning, the toddler wails. He is immune in his sorrow to his grandfather's words:

"Stop crying! Listen to me! Stop crying!" He says this in the desperation that any who are or have been parents would know. The wailing cuts through the air and into the guts. "Stop crying."

But the toddler has no words to compass and control his sorrows. He cries and cries.

Last night Donald Trump was declared the winner of the 2016 presidential race. He beat out Hillary Clinton, a woman thought by many to be the odds-on favorite to become the first woman president and, more centrally, the president. The effect among those like me who thought Clinton would win was as if the oxygen had been sucked out of the oxygen. Trump, the sociopath and bully and man of no certifiable policies -- the insulter of women and minorities ... the man who wanted to W-I-N ... had won.

My wife said she heard a report that Canada's immigration page was overwhelmed on the Internet and had crashed in the wake of the Trump victory.

But the body blow will be absorbed. What happens when those who long for victory actually win? One of the things is that bureaucracy kicks in: It's easy to assail and promise, but the particulars are always as glue-y as bubble gum. Will Trump be able to re-enfranchise those who have felt disenfranchised? Trump has the White House (executive) and the Congress (legislative) (if I've got it right) and ... OK, show me what you've got.

Christine Lagarde, the chair of the International Monetary Fund, said in a recent report that if economics proceeded along their current trajectories, there would be a growth in a "new mediocrity." The once great United States of America ... mediocre and, with principles sagging, more dictatorial.

As for today, it has been quite a kick in the chops.

PPS. And then there was the making of the First Family.