dressing up for mom 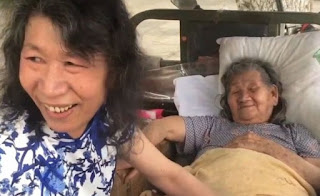 A video about a man in his fifties who has been dressing as a woman for 20 years "to help his mentally ill mum cope with the death of his sister" is being widely shared on Chinese social media....
He told Pear Video that he started dressing as a woman after his mother began to show signs of mental illness following the death of her daughter.
He added that his mother was immediately convinced that her daughter had come back.
"She was so happy, so I kept doing it," he said.
"I've basically been living as a woman ever since," he added. "I don't own any men's clothing."

There is something peculiar about this story, but in the end, I guess everyone gets by as best he or she can.
Posted by genkaku at 5:20 PM