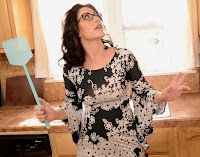 
A few weeks later, I get to view a selection of custom porn films. The producers Dan and Rhiannon of Anatomik Media have brought them to my hotel room in West Hollywood. Dan and Rhiannon are a married couple in their early 40s. She is from LA and he’s from Illinois. They met when they were in a band in the 1990s. The most striking thing about them is how much they love their work....
“It can be really neat,” Rhiannon says. “We end up – especially with our regulars – getting to really know them. We learn more about their fetishes and start to get them down. With most of them, there’s something really endearing.”
“Some of them are crazy, because they’re just so normal,” Dan says. “Like the flyswatter.”
“Oh, yes, the flyswatter!” Rhiannon says.

It all sort of reminds me of (was it?) Aldous Huxley's remark that "if the intellectual travels long enough and far enough, he will return to the same point from which the non-intellectual has never started." Be as raunchy as you like as long as you like and eventually you will become enamored of what is simple and socially inoffensive.

And vice-versa, of course.