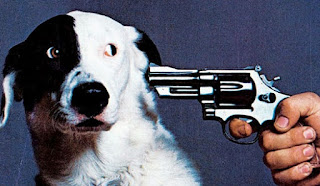 Assuming anyone takes an interest in the news, it is impossible to escape these days from the Schlockmeister, U.S. President Donald J. Trump and his family and his supporters. There are so many locusts in the sky that honest issues like healthcare and tax reform are blurred and re-blurred. And of course it is not Trump's fault that nothing gets done. God knows I can't pretend to get it all straight, even to the point of coming up with a nice tangy bias. But that doesn't mean I can't appreciate/dislike the confusion.

And the Washington Post has an interesting compendium (that goes on and on and on and on) about the whole multi-faceted clusterfuck ... a couple (though not the only) of whose observations resonate where I sit:


THE BIG IDEA: The Trumps are congenitally unable to take personal responsibility....
In a sense, the Republicans fit Colin Powell’s Pottery Barn rule about Iraq: ‘You break it, you own it.’ Republican leaders, from Paul Ryan to Reince Priebus, allowed Trump to break the Republican Party and now they own the consequences.

There was an era in which "parlous times" had some meaning.

It feels these days as if American political arena were far beyond that.

Is there a humane solution?