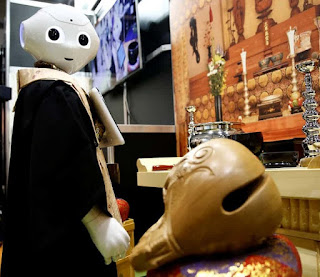 In Japan robots can serve as companions, helpers for the elderly, entertainment bots and even sexual partners, but now SoftBank’s humanoid robot Pepper has put itself up for hire as a Buddhist priest for funerals....
The robot was on display on Wednesday at a funeral industry fair, the Life Ending Industry Expo, in Tokyo, shown off by plastic molding maker Nissei Eco.
With the average cost of a funeral in Japan reaching in excess of £20,000, according to data from Japan’s Consumer Association in 2008, and human priests costing £1,700, Nissei Eco is looking to undercut the market with Pepper available for just £350 per funeral.

Given the glowing devotion that the Japanese can cast over death -- and the income derived therefrom by religious institutions -- this funereal 'advance' is awkward at a minimum and culturally tumultuous at worse.

PS. A Japanese movie I really liked was "Departures," the tale of a young man who learns the art of preparing the dead. Whatever its flaws, the movie was touching as no robot can ever be.
Posted by genkaku at 5:48 PM