the unending war on chewing gum 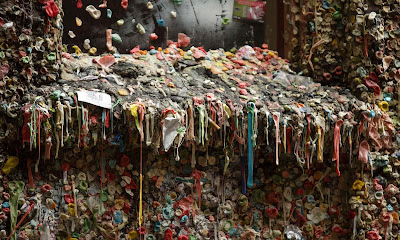 Each night dozens of trucks carrying 15 people depart from Mexico City’s downtown to Francisco I Madero Avenue, the most famous pedestrian street in the capital. Armed with 90C vapour guns called Terminators, the group begins the laborious task of combing the street looking for small, black circles fastened to the ground.
It takes them three days, working in eight-hour shifts, to go through the 9,000 sq metre avenue. By the end, they have removed a total of 11,000 pieces of chewing gum....
The war on gum is waged in cities worldwide. The Wall Street Journal denounced gum as a “black plague” on New York City almost a decade ago, and cities from Seattle to Singapore have made eradicating it a central part of their urban philosophy.

Imagine what it would be like to extract the thoughts and plans and sorrows and laughter from each colorful bit of chew. What an advertisement for silence, perhaps.