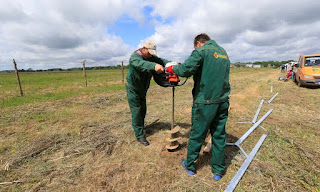 For those approaching the border crossing from the Lithuanian side, the Russian guards and military personnel are obscured by a bend in the road and the trees of the Ramoniškiai forest. Only a towering communication pole, watching and listening, shows how close they are.
Barely 50 vehicles a day pass through here making their way between Lithuania, once part of the Soviet Union, and Kaliningrad Oblast, a Russian exclave on the Baltic Sea. Wedged between Lithuania to its north and east, and Poland to its south, Kaliningrad is about 800 miles (1,300km) from Moscow. ... This doesn’t look or feel much like a modern-day version of Berlin’s Checkpoint Charlie. Yet the 45km of land border on which the Ramoniškiai crossing sits ... has become a worry for the government in Vilnius, the Lithuanian capital, a swift tank ride away.

The U.S. has wall-worries of its own. At least the Lithuanian hole-digger in the photo looks less expensive than the barriers envisioned by the U.S.
Posted by genkaku at 5:22 PM