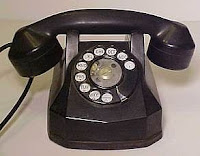 As far as I can recall, there was only one phone in any house I ever lived in as a kid. One phone, no matter how large the house, no matter if there was one story or two ... just one phone. How the hell did we survive and communicate? It's a mystery right up until the moment anyone might acknowledge they don't actually need a phone at all.

This is not a plaint for the 'good old days' or a mewling whine for 'simplicity.' It's just noticing. The news anyone actually needs arrives unbidden and irrespective of electricity.

In somewhat the same neighborhood, I am a big fan of "stand up, speak up and shut up." Anyone who needs more than five minutes to sum up whatever topic they take seriously has not yet understood the topic they may claim to love. Not that all topics have to be truncated in this way. It's just that knowing the kernel of something is probably a better place to start.

These days, of course, we have the dismal realms of Facebook and Tweet messages that enforce brevity without assuring clarity. Just because someone takes five minutes or fewer to speak their piece does not assure that they know their topic at its roots. Long-winded ignorance has been displaced by what often amounts to short-winded nitwitdom. Shakespeare's "brevity is the soul of wit" has fallen on its sword in a day when brevity is more often the soul of disconnected cotton candy.

I am as guilty as the next fellow of self-serving, inconsequential blather, but I miss the discursiveness that has meat on the bone and, with luck, is brief.

Depressing but apt meat, for example, can be noted in "The War You Don't See," which was passed along in email this morning. The film may be longer and more grueling than anyone is patient enough to ingest ... but at least it's not just a tweet for twits.
.
Posted by genkaku at 8:17 AM