.
Wistfully or insistently, I have a hunch there is a human longing for some Rosetta Stone in life -- some explicator that clears up and makes sense of every aspect of life, whether pleasant or unpleasant. It is to this entity that life's children might turn after falling from or attaining the heights of this playground's Jungle Gyms. Mom or God or the Intellect would soothe or approve, depending on the circumstances, but in all cases would be comfortable -- a place of light without shadows, an answer to all questions, an amen before and after all the parishioners had left.

The literal Rosetta Stone was discovered during the early 19th century. Carved on a single piece of rock was a decree written in three languages, one of which was hieroglyphics, an ancient Egyptian format that historians and archaeologists had not yet been able to decipher. From the Rosetta Stone, the meaning of hieroglyphics could be deduced and Egypt's ancient mysteries in some ways could become less mysterious. And since that time, "Rosetta Stone" has become a metaphor for the essential clue that helps unlock any new field of endeavor. 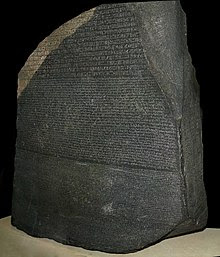 On a personal level -- to the extent that it exists -- the mystery consists of wondering what it might be that would address and soothe the ups and downs of this life ... the joy that turns to sorrow and back again; the inescapable changes that give nothing an unassailable footing; The Explanation and release. One Rosetta Stone after another is tried and found wanting. And still, wistfully or insistently, the longing persists.

Well, not to make a long story any longer than necessary, perhaps the whole matter can be wrapped up this way:

The mystery consists in, "I want to be in charge."

And the Rosetta Stone consists in, "I am in charge."