-- In hard economic times, private lobbyists are receiving public pensions in 20 states here in the U.S.

-- Syria, a country wracked by an endless slaughter, has agreed to allow U.N. inspectors to investigate a site that left another 300 slaughtered, apparently with chemical weapons that were skilfully administered. The greater the delay in allowing investigators in, the greater the chance that evidence will go missing. If the evidence is missing, it will be one more reason for 'civilized' nations to delay whatever engagement might mitigate (or perhaps increase) the slaughter. The U.S. -- once a leader worldwide -- has been and continues to be stymied by the uprisings in the Middle East. 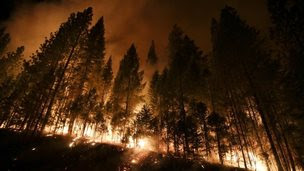 -- The 16th largest forest fire ever in California (203 square miles) is now seven percent contained as it edges towards Yosemite National Park in very rugged terrain.

-- Who knows how long it will last given the resurgence of the mindlessly strict Taliban, but currently there is a children's circus making the rounds in Afghanistan, home to the latest American invasion.
Posted by genkaku at 3:40 PM