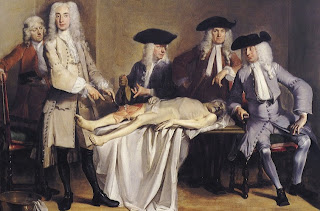 During the 18th century, a French doctor who identified with the rationally-inclined encyclopédistes performed a thorough autopsy on a human corpse and announced that he had not found a soul. He was triumphant. In a time when thinkers battled to throw off the yoke of dogma and ritual that had preceded their own, I can imagine the encyclopédistes were delighted and a bit smug: If something did not exist empirically, then laying claim to it and creating a socio-religious fortress around it was clearly unwarranted, if not ridiculous. Needless to say, the doctor's discovery did little or nothing to rein in the power and pronouncements of the church. The power of reason is sometimes powerless in the face of human story-telling and hope and, on occasion, sheer idiocy. But who is the idiot?

Aren't automobiles wonderful? I think they are. They whisk people here and there at speeds they could not otherwise accomplish. They are self-contained and complete. Though mostly forgotten, perhaps, there is an credulous enthusiasm that goes with cars and trucks. Is this terrific or what?! And yet, like the encyclopédiste physician, dismantling a car right down to its smallest cotter pin, with all the bits and pieces spread out carefully on a tarp, the wonder and marvel would be no where in sight.

If someone is truly devoted to and enthusiastic about something, is there an inherent responsibility to look into it, to take it apart as a means of honestly knowing what s/he is enthusiastic about? I'm not sure, but that is my inclination. Others seem content to dwell in the realm of uninvestigated enthusiasm, unexamined love and adoration. This strikes me as disrespectful, but I guess it doesn't strike others that way. Perhaps they already know that if they take the object of their affections apart, there will be nothing there ... no soul, no wonder, no tangible and visible thing called enthusiasm or marvel or love.

There's nothing there and yet there is something.

I guess what brought this all to mind was a nagging question I have had and asked over time. Or maybe it is a conclusion in search of a question. Or something ... anyway, it nags and I am not good at formulating it. And when I have formulated it and placed it before others I think may have some answer, I have received only silence. That's kool ... or is it?

The question arises out of the fact that I am sympathetic to those who point out the work-a-day flaws of spiritual life -- the trip-stones and cruelties that can crop up in the activities of spiritual expositors. You know, the ones who screwed the pooch with their sexual or financial depredations that did harm to others in a world claiming to dedicate itself to a wider kindness ... the pedophile priests in the Catholic Church or maybe Eido Shimano or Joshu Sasaki in the realm of Zen Buddhism or ... well, the list goes on and on and I have been around it long enough not to be surprised or even get as outraged as once.

In the midst of these scandals and upheavals, as fact after fact lays itself out on some metaphorical tarp, I have had longish discussions with those who have tasked themselves with revealing and collating the facts. I agree with many if not most of the criticisms: They are real and discernible and deserve correction. What is spiritual life if not a matter of correction? [Sometimes, for example, those seeking a corrective will suggest that those inclined towards spiritual life exercise their "common sense." This always makes me smile: In order to take up a spiritual life, it seems to me that common sense, by definition, is set aside, or largely muted, while pursuing the je-ne-sais-quoi of je ne sais quoi.]

OK ... so I have bought into the autopsies that have uncovered unhealthy tissue. Many friends are on a similar frequency even as many who feel threatened in their enthusiasms are not on that frequency. My question is not for my enemies, but rather for my friends -- the critics who have made what I consider meaningful criticisms.

Here is an attempt I made to ask one such like-minded critic:


The flaws in formatted spiritual life are no joke. They can be mildly harmful and they can be unspeakably cruel (think Vatican handling of the pedophile priests or a sociopathic Shimano treated to a 'noble' silence by his institutional brothers in arms). The flaws, my mildly-informed mind suggest, are apparent enough and frequent enough so that I am willing to generalize: All formatted spiritual adventures are a lie and it is from that lie that human beings, if they choose, must winkle out the truth. When talking with Stuart, I have asked, as I ask here: It is easy enough to pick out the flaws, perhaps, but, once having recognized the errors and missteps ... 1. It is interesting to note that the flaws exist within a framework that excites some acceptance -- a willingness to find flaw in something that is, wishfully or not, unflawed. So, what is it that is unflawed? 2. Picking out the flaws is important -- no need to be bigger nitwits than we already are -- but having picked out those flaws, what is it that holds out some nourishment for those who honestly yearn or ache?

My own half-baked view is that the importance of the flaws lies in the willingness of the format to admit in pretty simple and forthright ways, "Yup. We're flawed. It's the best we can come up with -- not great, perhaps, but better than having no tools at all to cope with so-called suffering. We will do our best not to pretend, implicitly or explicitly, that those flaws do not exist, but rest assured, we will fail."

And here is a somewhat similar observation made to another friend who is red-hot anti-religion:


At my age, I'm a little tired of unexamined enthusiasms. Nothing wrong with enthusiasm, mind you, but if anyone is truly enthusiastic about something, it seems to me there is a requirement to do a little full-frontal-nudity investigation. Without that, the beloved philosophy or religion or academic achievement or piece of bric-a-brac becomes a pretty unstable ego trip. Religion, like other enthused-about pastimes, is, from my point of view, a pack of lies ... a pack of lies from which each will have to winkle an honest truth. Whether someone else does this or not is not my responsibility. Whether I do it or not, assuming I have some enthusiasm for religion, is my responsibility.

It seems to me that if someone is enthusiastic about critiquing, then there is every bit as much responsibility to give some idea of why the critique is important, i.e. on behalf of what goodness is this evil observed? It is the same question that the unquestioningly enthusiastic and adoring might ask ... on behalf of what evil do I posit this good? Spiritual enthusiasts may fall back on the kindnesses being extended in a harsh world, but that merely begs the question and salves a well-dressed vanity: Don't throw the baby out with the bath water. It's a cheap date.

Oh well ... so much blather and I still feel as if I hadn't sharpened the pencil of my question. I sort of wish my Zen teacher were alive to give me, as I think he would, an honest appraisal instead of some fart-in-a-wind-storm silence. None of it is very important, I suppose, but it niggles and nags at my mind now and then: Everyone could use a hand; spiritual endeavor may be one such hand; but in what measure, precisely, is that help, when formatted, helpful and to what extent does what is proclaimed as good do little more than offer an equal measure of evil? And vice versa?

My problem. My life. My bullshit with which to grow the daisies.
Posted by genkaku at 9:04 AM