Like the grass and string and twigs that grace the sparrow's nest, there are bits and pieces that inform the home I appear to live in. Not much different from anyone else, I imagine. Just bits and pieces .... 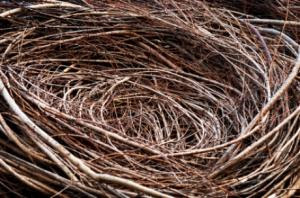 Today, two of them asserted themselves ... gently, as reminders... nothing special.

One came from the lips of a 90-plus-year-old woman who was once giving a pep talk to senior citizens. In the midst of that talk she observed, "If, after the age of 65, you wake up in the morning without any aches or pains, you will know you are dead."

The second came gossip-fashion from a Zen monk who made the observation to another Zen monk who passed it along to me.

In Buddhism, there are references to "suffering," a word sometimes simply translated at "unsatisfactoriness." "Suffering" has a bit of a gloomy cast, but "unsatisfactoriness" is a bit of a jaw-breaker. Either way, what is referred to is the uncertainty or edginess or plain old sadness that can infuse or nag or crucify anyone's life -- a life that may seek out a Buddhist practice as a means of clarification or amelioration.

Still, nailing down verbally what "suffering" or "unsatisfactoriness" might be usually occasions more words than it does clarity.

Nevertheless, the second bit of nest-feathering was this: "Maybe suffering is just the resistance to pain." A good observation, I think.

Of course Buddhism has some occasionally-acid words for the habit of nest-feathering -- of creating and clinging to a fixed me-ness -- but I am getting a bit long in the tooth to resist my idiocies.
Posted by genkaku at 9:09 AM