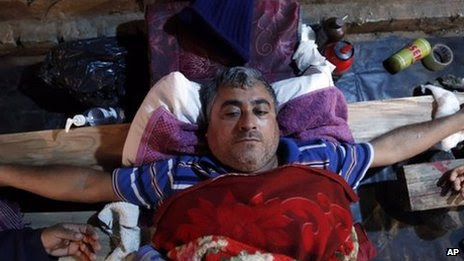 Eight Paraguayan bus drivers and a woman have submitted to crucifixion in a protest against being sacked.

The men have been nailed to crosses through their hands for 20 days, and have vowed to continue their protest until they are reinstated.

The drivers say they were fired after "asking for overtime pay, medical insurance and state pension contributions."

PS. In another sort of crucifixion, fast-food workers were scheduled to go out on strike in American cities today.
Posted by genkaku at 9:30 AM