A lot of years ago, I was painting an apartment for a nice young guy in New York. As the work progressed, we would occasionally talk about this and that and one of the easy-going topics was religion. He was a fallen-away Jew and his wife-to-be was also a non-observant member of some faith. The two of them were planning to have a bunch of kids. 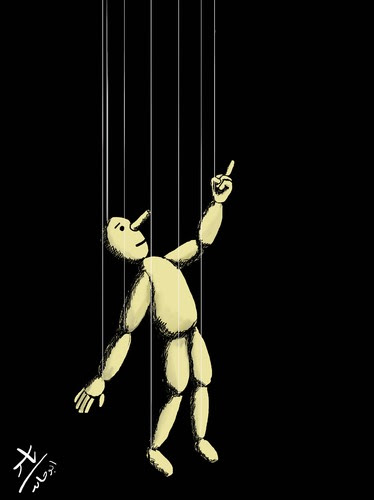 "Do you intend to bring the kids up in some faith?" I asked.

"Absolutely!" the young man said. "The kids will be brought up Jewish!"

"But why would you bring them up Jewish when you aren't observant yourself?"

And with a wit laced with utter seriousness he replied, "I want them to have something to rebel against."

On the one hand, his reply brought a smile to the lips. On the other hand, rebellion really is important to growing strong muscles and an experienced life. Rebellion may do nothing more than create an arena that likewise demands rebellion, but the learning experience is worth the price of admission.

Even those who 'never rebel' express and learn from a rebellion against rebelliousness... a plodding or sincere conformity that holds firm and fast and does not waver ... even as the world around them wavers without ceasing.

So ... blow it to smithereens or mortar its walls with a determined care -- still what might be called the rebellion gene goes to work.

The idea that things might somehow not come apart betokens a rebellion that leaves the empirical facts gasping for air. Strong mountains are reduced to grains of sand which in turn are reduced to molecules which are lifted up into the sky and fall as rain on yet other strong mountains. There's nothing sexy or spectacular about it -- it just seems to be what happens. Joy turns to sorrow and back again; what was valued loses its value only to regain it; importance and unimportance flow in and out of each other without so much as a by-your-leave.

Well, I could go on and on, but something within me snickers and rebels: Roughly speaking I think the rebellion gene is the longing for or acknowledgment of the limitless, whatever the hell that is. And that longing or understanding squares off against anything and everything that is limited. No matter how daunting or delightful or wisely abstruse, limits are not enough to tell the whole story and the rebellion gene knows it and inspires a man or woman to peck-peck-peck against the egg shell of one limitation or another, one composite thing or another ... there must be open space and freedom and peace out there somewhere. Peck, peck, peck; rebel, rebel, rebel.

There will be those who elevate and wax wise about the limitless, but I think it would be unwise to heed their counsel. Raised up in this way, the limitless just reflects the impositions and quandaries of what is limited ... how good it feels to stop pounding your head against a wall. "True nature" as distinct from some other expression of nature is ... another composite matter ... another egg shell against which to peck-peck-peck.

Composite things are constructed of two or more other things. Are there really other things? Maybe yes, maybe no. Figure it out, assuming you think you can figure it out. And once you have figured it out, be prepared for the rebellion that is sure to follow.

And when it all becomes to wearisome and airy-fairy for words, take a break.

What the hell is the matter with a sip of tea?
Posted by genkaku at 8:35 AM