On a TV channel around here, it's "mob week" -- a lot of movies involving organized and disorganized crime of one kind or another. Most of them are oldies-but-goodies, though I did see one the other day that I had never seen, something called "Hoodlum," which was a change-from-potatoes in the sense that most of the actors were black ... and every bit as venal and violent and self-centered as any of their white-bread counterparts. The fact that it was set in the 1930's added a dash of delicious. 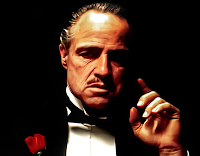 And of course the TV tsunami included "The Godfather" in all of its sequeled glory. It was a line from the first of those movies that floated up in my mind this morning ... slipping up quietly along the byway of the question, "Does anything that's true require emphasis?"

In spiritual study and practice, many things are addressed as a (best-case scenario) means of easing a participant's heart and mind. Among the warning flags raised in some spiritual adventures is the matter of name and form ... two aspects of existence that can embroil and flummox an inattentive aspirant. Name and form are not naughty or wicked or sinful, but they are tentative and hence deserve attention: No point in being any stupider than I have to be. The Zen Buddhist teacher Rinzai pointed this out, for example, when he said to his students, "Grasp and use, but never name."

In "The Godfather" movie, there is a scene in which the godfather (Marlon Brando) and his consigliere (Robert Duvall) are riding in the back of a limousine. Duvall asks whether, in upcoming negotiations with another crime lord, he should demand that those tasked with a planned criminal maneuver should all have clean police records. And the godfather replies, "Mention it. Don't insist."

Can anyone really convince anyone else of the truth of anything? The truth of name and form, for example, is not a matter of converting benighted souls. The truth is the truth irrespective of who says what or who knows what. Asserting the truth and suggesting that anyone else has things all wrong is largely an ego trip ... though it is sometimes camouflaged as "compassion."

If God is true, the necessity of insisting strikes me as betokening more doubt than certainty.

If name and form are tentative, are they any more or less tentative because someone insists?


If the sky is blue, will a four-hour discourse improve or revise that?

The dime drops or the dime doesn't ... same difference when it comes to the truth.

And by extension, I wonder (perhaps too insistently) if insistence, whether within or without, isn't a pretty good tip-off that doubt is in control and the truth is on vacation

Perhaps the distance from the objective can be measured by the insistence placed upon it.
Posted by genkaku at 8:34 AM