academic credentials ... or not

Noodling idly this morning, it occurred to me that academic accomplishments are a bit like the old joke about male endowment: "It's not the size that matters, it's what you can do with it that counts." 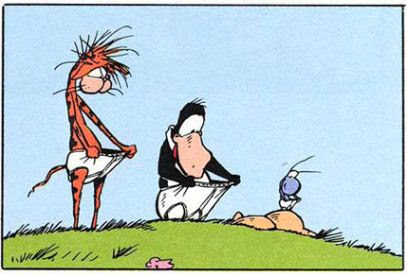 And the analogy holds true right down to the hopeful recipients who may whisper emphatically behind cupped hands, "Size DOES matter!"

What brought this to mind was a wider personal interest: Are there any studies out there that attempt to measure the relative intelligence/happiness levels of those who attend institutions of higher learning and those who don't? I don't mean just the money and privilege ... I mean in real time, between life's covers.

Education is often touted as a key to success and those who lack it are mourned as people who have been denied an important opportunity ... an opportunity to step out of poverty, an opportunity to see possibilities, an opportunity to connect life's dots. I too can make some of that argument, but this morning I think of those people I know who lack academic degrees and whose outlooks I find refreshing and compelling and credible. They have had to rely on themselves and -- with a little luck -- have not turned out to be narrow-minded nitwits espousing some cult cause or flag-waving belief system. They seem to know stuff from the ground up ... "street smarts" it might be called, but whatever it's called, it is refreshing and convincing to hear their views because they really seem to know what they seem to know.