dough for the Dharma

Because I was reading a couple of ponderous posts about it elsewhere, I thought I would stick my oar in the water. 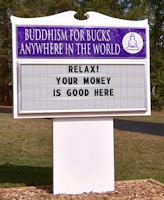 Most of the ranking Buddhists I have ever known, when speaking in a Buddhist context, have always spoken about two things with an almost-indelicate delicacy: Sex and money. It's as if the topics were too touching, too close-to-the-bone, too intrusive or something. These are not the smooth and soothing waters in which spiritual nostrums are wont to swim.

So ... what about paying your good money when entering a temple? Isn't the Dharma/God/Tao for free and if so, why should you pay for its emanations. And in one sense this question is sound: The Dharma is for free ... but please notice that if the person saying the word "free" had any notion of what that "free" might be, s/he wouldn't feel compelled to visit anything as off-track and unnecessary as a Buddhist center. The Dharma is free ... and if you know that for an actualized fact, why waste time playing "Buddhist?"

When the topic of money comes up vis a vis Buddhist centers, there are the invariable, fact-based references to heat, light, rent, mortgage, repairs, upkeep, food ... and whatever all else. The recollection that Buddhist monks used to be described as individuals "with one robe and one bowl" may be wonderfully delicious, but it generally overlooks the fact that not only did those monks eat out of the bowl, they also begged with it.

With so many charlatans on the loose -- $50,000 get-enlightened scams, teachers skimming, etc. -- it is hard not to be suspicious for very good reason.

I confronted the question of Dharma donations one day a number of years back when a woman who came here to practice zazen (seated meditation) bawled me out for not having a donations box. She wanted to give something ... what the fuck was the matter with me?! I didn't pretend to 'teach' the Dharma, but I had built the zendo (meditation hall), had supplied it with altar and statue and cushions to sit on, did buy incense and candles, etc. When I was still employed, I didn't begrudge any of this and was happy to share it with anyone who cared to sit as well. And even now, when living on a fixed income when I might easily use a little extra to make ends meet, I am reluctant to ask for money.

But then I realized the woman who bawled me out had a very good point. A donation, aside from anything else, provides a level playing field. It's a quid pro quo, so to speak, that says the monitor and those monitored are all in the same, practicing-Buddhism boat. There is a good deal to be said beyond that about the benefit of handing over a little hard-earned cash to the temple of choice, but let's keep it simple.

After the woman cussed me out, I was forced to rethink money, that delicately-indelicate stuff. And what I came up with is hardly a template for other centers that work 24/7. My decision was this: A. I built a donation box and hung it on the wall and B. I made up a rule that no one was allowed to make a donation until they had come at least three times. At that juncture, each person would be required to decide how much money should go in the kitty ... make a decision about how much ... and then add one penny. This worked pretty well because very few came back more than three times.

I'm not saying my solution is The Solution. Temples have bills to pay and stomachs to fill. If anyone thinks the Dharma is for free, there is a very simple recourse: Don't visit a Buddhist temple. If the Dharma really is free, why bother going in the first place?

On the other hand, I see nothing wrong with keeping an eye skinned for the scam artists.
Posted by genkaku at 11:43 AM