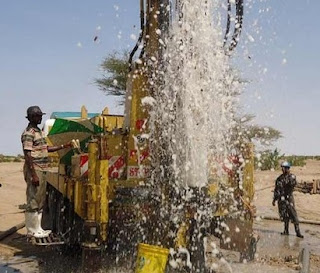 The discovery of an enormous fresh-water aquifer in Kenya, an often arid land in which the unblinking eyes and bloated bellies of small children are common, fuels hope and joy in the heart. How wonderful if those forced to rely on quonset huts stuffed with donated food stuffs were able to grow their own, not to mention drink without caution.

Researchers say there is enough water in the aquifer to supply the country for 70 years ... and this in a country where a little less than half of the 40 million Kenyans lack access to fresh, clean and life-giving water.

The land is thirsty. The people are thirsty. From my cosseted distance, I cannot pretend to know the decimation of such thirst. And yet here is an answer, a response, a salvation ... and it's for free. Freely given from beneath the dry, dry soil. Free. I am glibly glad that those who have borne so much might now bear a little less ... for free.

In the case of Kenya and surrounding arid lands, it is not entirely cynical to imagine that it will take expensive technology to release and employ what is, in the moment of discovery, free. It is not entirely cynical to wonder how much of what is free will trickle down to those in dire need. Someone -- drillers, government officials and who knows who else -- will have to get paid and there are always people willing to say, "that someone is me."

So what is or was "free" will be diluted. There will be some measure of relief ... after those in need go through the toll booth. And in consequence there will rise up a moaning contingent that is horrified by the prices demanded: "Greed!" they will intone from a reproving and careful distance ... as if that solved anything.

OK ... it does take a toll to reach what is free. And OK, there will always be a faction -- in government or in the heart -- that elevates the price to their own advantage. Both at once ... all as a result of what is "free."

Spiritual life is somewhat the same. What is under consideration -- from heaven to enlightenment -- is free. In Buddhism, who has not heard the assertion that "the Dharma is free." And of course they are right in one sense ... the Kenyan aquifer is free. But also, spiritual aspirants are remarkably touchy about their wallets -- touchy, and conflicted.

Why should they pony up for what is for free? And from there, the conversation can go on and on and on: There are charlatans fleecing the unwary; there are spiritual-center bills to be paid ... etc. etc.

But I once heard that a Zen teacher (Yasutani, maybe?) was asked why students had to pay so much for retreats and other teachings. Wasn't this out of synch with the freely-available nature of the subject at hand? He laughed and said seriously, "Oh yes! Charge them a lot! That way they will think they are getting something."

And this is the conflict: I don't want to pay what is for free -- buying snow and ice at the North Pole -- but by what other gauge can I know that I have gotten anything worth having?

I may allege that I want what I call "priceless" and "free," but what is the first thing I do when it's offered? I put a price on it, I value it and I praise it. In short, I set up the very toll booth I claim to find onerous. This is a pretty good indicator that I haven't yet got a clue as to what "free" means, no matter how many refined words I may wrap it in.

About 200 yards from my house, my neighbor Giles teaches martial arts. Giles is serious about his practice -- which is to say he does not see it as a mere adjunct to his life. This is life. His dojo is set up in a barn behind his house and as a result he is in a position to offer instruction for free. If my memory does not fail me, Giles initially offered his training for free. When students failed to appear, he upped the ante to something like $30 a month, a pittance compared with other martial arts centers. And even then, he once told me, he was missing out on students who were deeply skeptical: How good could his training possibly be if he only charged $30? ... I don't want some junker! I want a Rolls Royce!

I want what is free.

I don't want to pay a price for it.

I or others set up a toll booth.

Is "free" a myth or is it just my mind that is flummoxed?