global support for "Tony the Monk"

OK, I pretty much shot my energy wad this morning working on the press release that follows and figure I might as well post it here, if only to show I am not short-changing my writing addiction:

Global reaction to the savage beating of a Buddhist monk in Spencer, Okla., is on the rise, a fund-raiser for "Tony the Monk" said Friday. 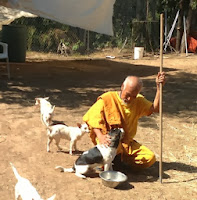 "The internet site (http://www.engaged-zen.org/Tonyappeal.html) went up on Monday," the Rev. Kobutsu Malone, a Zen Buddhist priest, said. "Since then, donations have come mostly from the United States, but a growing number are coming from England, Spain, Norway and other European countries. We expect to see a similar generosity in the Pacific countries as word spreads."

Weera "Tony" Chulsuwan, 66, came out his front door in Spencer on Aug. 30 in order to find out what two teenagers wanted. When the young men told him they were there to rob him, he told them he had nothing worth stealing: Chulsuwan lives on a $350 per month Social Security payment and uses most of that money to shelter and feed a host of animals that others cannot or will not care for themselves.

Chulsuwan's observation did not satisfy the young men, who proceeded to beat him with a steel pipe and a logging chain. "Tony the monk," as many of his neighbors refer to him, was struck at least 15 times in the head. After beating him, the teenagers ransacked his house and then fled. Chulsuwan lay outdoors for 24 hours before regaining enough consciousness and strength to crawl inside and call 911. His attackers have not yet been apprehended.

Chulsuwan, who is now back at home and recuperating slowly, wrote a thank-you note to all those who have offered a financial hand.

"I thank you all from the bottom of my heart for the kind thoughts and prayers and too for donations to help my animals and medical bills," he wrote in part.

Malone said he was really touched by the generosity of donors.

"It's wonderful to think that in hard economic times, people can express their generosity in one small instance. With all of the suffering in the world, it's sometimes hard to know how to express concern in an effective way. Tony's case seems to have hit a nerve: Here is an situation in which the donations go directly to the wounded party. There are no intermediaries to dilute the gifts. As one donor said of her donation, 'it may not be much, but at least it's a little.'"

Malone, who lives in Sedgwick, Maine, and never personally met Chulsuwan, said he had sent the appeal to both Pope Francis and the Dalai Lama, but he was really counting on the generosity of those who lacked a high profile.

"My own sense is that people are naturally generous," he said. "They are always looking for ways to express that generosity, even when it is not easy. Tony and his animals offer a good opportunity and I think people know it."
---30---