I suspect the local newspaper is not going to use this rather whopper-jawed column submission, so I might as well put it here ... if only as an example of how not to approach things. The essence of writing is rewriting and this could use a rewrite. Nevertheless....


Whaddya know -- the Internet really is good for something more than the transmission of  dirty jokes, the purchase of designer-label toilet brushes, or the delivery of heart-felt bias passing as reasoned argumentation!

This realization came as something of a shock to me because whereas I like a good joke and am willing to imagine that hundreds of toilets are happier and have learned to filter out high-volume sincerity masquerading as reason, still there seemed little or no ground-zero usefulness to it all.

Or anyway that's the way I felt until last Monday. 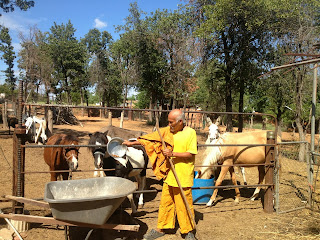 On Monday, a friend of mine, the Rev. Kobutsu Malone sent me a short news story about a Buddhist monk in Oklahoma -- a guy neither of us had ever met. "Tony the Monk," 66, lived alone on $350 per month in Social Security and spent most of it on taking care of animals others wouldn't or couldn't care for.

The news story told the tale of two teenagers, 14 and 15, who came to rob Weera "Tony" Chulsuwan on Aug. 30. When he told the boys he had nothing worth stealing, they beat him with a pipe and a logging chain, ransacked his house and fled. At least 15 blows to the head left Chulsuwan lying in the dirt for 24 hours before he regained enough consciousness and energy to crawl indoors and call 911. He is currently at home, recuperating slowly. The boys have not been apprehended. Chulsuwan's ambulance bill alone is over $600 and the hospital costs have not yet been enumerated.

Kobutsu and I were viscerally touched, not so much because Tony was a Buddhist and we were too (and those Buddhists stick together dontcha know!), but because the whole episode was so ruthless and mindless and cruel and utterly human. From our point of view, Buddhism could go suck and egg -- this had to do with a single human being, someone, as Kobutsu put it, "that I can help."

And that's where my Internet surprise kicked in. Kobutsu did most of the heavy lifting, setting up an Internet donation page (http://www.engaged-zen.org/Tonyappeal.html) and the two of us each scoured our email address books ... sometimes for people we knew but as often as not for people we had no recollection of knowing.

Much to my Internet-jaded surprise, the donations began to roll in. And it wasn't just "Buddhists." And it wasn't just Americans. The gifts came from all over the world, from all kinds of people. England, Michigan, Spain, Illinois, Norway, California, Portugal -- the list went on and on ... and it had only been five days: There appeared to be something touching in "Tony the Monk's" misfortune and people were willing to pony up as a means of demonstrating their concern.

As touched as I was by Chulsuwan's beating, so I was further touched by the people willing to send little and large measures of their sympathy.

Touched and somewhat confused: My easy-peasy bias about the Internet had been punctured. With all the tragedies available in the world these days -- from economic repression to yet another righteous and bloody war -- wasn't it strange that the Internet could assist so concretely in one small matter?

I guess Kobutsu summed things up as well as anybody when he observed, "My own sense is that people are naturally generous. They are always looking for ways to express that generosity, even when it is not easy. Tony and his animals offer a good opportunity and I think people know it."