The London fire brigade is urging people to use common sense after reviewing the calls they received from people needing help in somewhat bizarre situations to which they had subjected themselves. Not the least of these was the case of a man who got his penis stuck in a toaster.

I suppose others may have a similar reaction to mine when I received this story in email this morning ... something between laughter and sympathy and disgusted astonishment: "When god was handing out brains," my carefully-aloof mind intones, "these people were definitely short-changed."

I wonder how much of what passes for "common sense" is not really that common at all ... but more likely is tailor-made for the individual expressing it. Yes, we may agree that sticking your pecker in a toaster defies common sense (what was he thinking?!), but as circumstances become more and more distant from the bizarre, what is "common sense" seems to become less and less certain and receive less and less generalized approval.

A practicing Buddhist, for example, might consider it common sense to observe that attachment to people or things or ideas produces sorrow and uncertainty. But, if my country is any example, attachment is all the rage as a means of assuring happiness. And my own "common sense" is no guarantor of my ability to steer clear of what makes me unhappy. I may not stick my pecker in a toaster, but I seem all-too-capable of finding other toasters. 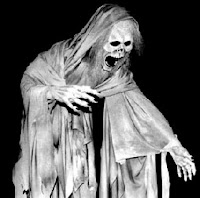 Around here, food and novelty stores are stocking up on Halloween (Oct. 31) paraphernalia -- candy and masks and costumes and plastic weapons dripping with 'blood.' Television stations that show movies are promising a glut of scare-you-to-death tales. Ghosts and goblins and malevolent spirits of all sorts are preparing to say, "boo!"

I like movies, but I don't do gratuitously-grisly (and more often than not ham-handed) scary shit. My common sense tells me that there is enough scary stuff in life and it hardly needs any help. But there are a lot of people who like scary movies. Sometimes I wonder if part of the reason they like them is that they are excused for the moment from facing the scary stuff in life as they survive one movie or another ... sort of like hitting your thumb with a hammer as a means of taking your mind off a broken toe.

Whatever the case, I don't do ineptly-made scary stuff. I don't like being scared so my "common sense" kicks in. But is this "common sense" -- the stuff that 'everyone' agrees to -- or a carefully-tailored "personal sense?"

I have tremendous sympathy for the London fire brigade and its salvific efforts in the face of human foolishness. Urging "common sense" strikes me as the kindest possible way of asking someone to stop being an asshole.

Yes, I have sympathy and I have respect for the fire brigade ... but I hope the brigade will excuse me for a moment while I search out my latest toaster.
Posted by genkaku at 8:30 AM