-- It was three days ago that the first squadron of Canada geese of the fall passed by. I heard them like old friends in the next room, symphonic in the sky, heading south, heralding a winter yet to come. As yet, the number of squirrels loping across the street, big, pulp-covered nuts in their mouths, has not turned into the rush hour it will be. And soon, but not yet, the frost on windshield and still-green blades of grass, will make its debut. Not yet ... but now.

-- Before the first sips of coffee were down today, Theresa, a nearby but unknown neighbor I guess, stopped outside the house to look over the van on which I had placed a "for sale" sign. As by usual habit, I was sitting on the porch, encouraging my body to wake up and get over itself. The small dog she was walking stopped as well as we chatted in the early-morning light ... first about the car whose loss will bring insurance bills down and cut off one more expression of personal mobility and control, but then about family and general human concerns. It would be nice to sell the car -- and I told Theresa the price had been reduced -- but the conversation was as rich as it was unremarkable.

-- A snail-mail thank you came from Weera Chulsuwan, the Buddhist monk in Oklahoma who had been beaten and left for dead Aug. 30 and for whom Kobutsu Malone and I had made some financial efforts that resulted in more than $8,000 collected, a new used truck and a well on "Tony the Monk's" property. "The world is full of good people," he wrote. "It is a shame we only hear about the bad ones." He's right in my book ... and I cringe to think how many, like me, might mindlessly applaud his sentiment. But more, I am wowed and wondered by the number of people who took the trouble to contribute. 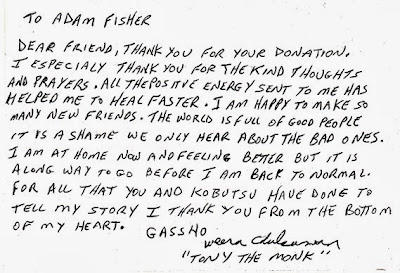 -- Last night, as I might take a soothing sleeping pill, I watched a bit of "Page Eight" again before going to bed. I've watched it three or four times in the past. The BBC tale focuses on some in-fighting in the British intelligence services but offers up characters with character as well and there are unspoken threads of frailty and honor woven into the plot. What I find soothing about it is the notion that there is something to be said for addressing the issues in life ... issues as issues and not, as is more commonly the case, issues that can confer power or self-importance or anointing meaning. The unwillingness to attempt such a feat leads, as the story suggests, to corruption and cruelty. But those who do attempt it are not all burnished and shiny and heroic: They too are flawed ... and yet unwilling to surrender to a mediocre go-along-to-get-along. The line between corruption and clarity is gossamer-wispy unto invisibility ... and yet it is a line as clear and bright as a comet cutting through the night sky. It soothes me to think that this effort exists ... even if only in fiction. And that feeling laid my head gently on the pillow.
Posted by genkaku at 9:25 AM