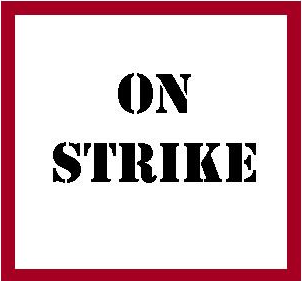 I wrote this column and submitted it to the paper last week, when it was relevant. The strike  alluded to has been settled, so I can't imagine the paper will run it. So I'll file it away here:

ON STRIKE? WHAT'S A STRIKE?

It is probably a testament to the Republican success story that my jaw dropped when reading (Gazette, 9/28/13) that the International Union of Operating Engineers Local 98 had gone out on strike.


I grew up in the 1940's and 1950's, an era that remembered earlier bloody labor battles --  the Pullman strike of 1894; the 1922 slaughter of 36 people in a Herrin, Ill., coal mine action; and the 1930 arrest of over 100 during an attempt to organize California farm workers. In each of these and dozens of other confrontations, both before and after, workers took a stand against an industrial might that had the cops and the military on its side. They won some and lost some and, mostly, they kept on coming, despite the spilled blood that was mostly theirs.


Not that, as a kid, I actually had such actions in mind, but my mother had a bunch of old 78 rpm records of Pete Seeger and the Almanac Singers -- a group designated as "socialists" or "reds" by detractors. They fought the labor fight with music. I imbibed and hummed along to "Talking Union" and "Which Side are You On?"


The blood shed during those early confrontations provided me and mine with, among other things, a 40-hour-work-week, a minimum wage and an acknowledgment that labor and management would negotiate rather than spill blood -- the literal blood spilled in the past.


But time passed and some unions got pretty autocratic in their own right. A little at a time, workers began to buy into the Republican/management story that unions were something that would clog the wheels of  a prosperity from which they too benefited. Management's underlying message -- a message workers began and continue to swallow  -- is, "You're lucky to have a job and if you organize, our mutual prosperity will be diminished if not erased. Keep your head down and be grateful for what you get."


The Republican/management argument was so successful that by 2010, 11.4 percent of all American workers were members of any sort of labor union. Simultaneously, the dime began to drop: "Mutual prosperity" is defined differently by different people and a little at a time, it became apparent that a rising tide of prosperity does not raise all boats equally or even equitably. The blood of the past had been slowly washed away until the current mindset was more in line with what the prosperous might prefer it to be.


So successful was the story-telling of the prosperous that my jaw dropped when reading the Gazette story.


I was somehow flabbergasted to read that the International Union of Operating Engineers Local 98 had gone on strike. There are about 100 of them, according to the Gazette. These are the guys and gals who run the heavy equipment necessary for road, bridge and other construction projects. The strike has some no-joke fallout because of various bridge and roadway projects underway in the western Massachusetts area where I live -- an area that might be too-generally described as simpering and vaguely effete with its convocations about climate change, peace, nuclear power plants and the like. The engineers, with their cranes, bulldozers and other heavy equipment, are here-and-now, meat-and-potato folks.


I cannot pretend to know or be able to evaluate the issues involved in Local 98's strike. I am trying to get my head around a strike in hard economic times and with a Republican/management agenda in the social catbird seat. I am trying to get my head around re-fighting the battles that were fought so long ago. I am trying not to feel joy on the one hand and sorrow on the other: Occupy Wall Street had no real handles to grasp -- it was a good expression of widespread malaise and anger -- but Local 98 is concrete, a battle that may be won or lost, but in any event is worth fighting. That's the hot-damn part.


The sorrow part are the varying kinds and amounts of blood that are bound to be spilled ... again.
Posted by genkaku at 4:44 PM