Today, I will sell the last car I will ever own. It's a good car -- a 2000 Dodge Caravan SE -- but finances are tight around the house and the fact is I use the car very little (supermarket, doctor's appointments and an occasional photographic adventure). 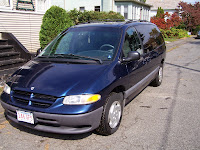 On the one hand, it's a relief: No more insurance premiums, no more repairs. On the other, it's the sale of my sense of definition and sense of self-sufficiency. The scenario is not especially novel -- older people often feel this lash -- but, since it's new to me, it's new. And it's interesting that those offering solace are most frequently those who don't face the problem... sorta like 'celibate' Catholic priests mewling about the sanctity of matrimony or child birth.

My wife and son both have cars, so I will be able to borrow, but borrowing is not the same as having the unhindered freedom that goes with "my car." "My car" has been an assumption for so long and now that assumption has been mortally challenged.

How many other unexamined assumptions do I make? Lots is my guess. They lie in the background of things, not especially interesting or coveted ... until they are undermined or taken away. And since advancing age is largely a matter of losing things, each loss stands taller in its impact.

No one else cares much about my loss and the fact of the matter is that it doesn't currently upset me that much either
(I haven't sold the car just yet). But it whispers and weeps a little, I guess.

Bit by bit by bit, the assumptions fall off.

Which makes me wonder a little ... what was the need for this assumption or these assumptions in the first place? I can't quite remember.