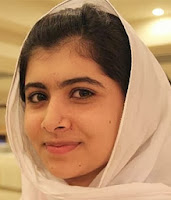 As important men and women around the world prove themselves incapable of important thought, as principles go begging in the midst of self-referential actions, occasionally there is a small voice. It is not a voice that is likely to be heard, much less taken to heart, but it is pleasing nonetheless.

Malala Yousafzai, the 16-year-old Pakistani advocate for womens rights and access to education, was on The Daily Show last night. And when Jon Stewart, the front man for the show, asked this young woman who had been shot in the head by the Taliban what she felt when she learned that the Taliban wanted her dead, she said this:

I started thinking about that, and I used to think that the Talib would come, and he would just kill me. But then I said, 'If he comes, what would you do Malala?' then I would reply to myself, 'Malala, just take a shoe and hit him.'  But then I said, 'If you hit a Talib with your shoe, then there would be no difference between you and the Talib. You must not treat others with cruelty and that much harshly, you must fight others but through peace and through dialogue and through education.' Then I said I will tell him how important education is and that 'I even want education for your children as well.' And I will tell him, 'That's what I want to tell you, now do what you want.'