Locally, a 58-year-old woman pleaded innocent yesterday to one count of armed robbery after she allegedly stuck up a credit union Thursday, demanded $50,000, and fled with some $7,000. She was armed with what was later determined to be a cap pistol. 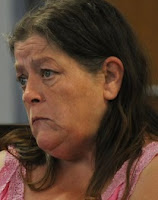 The woman, Vivian Poreda, was behind on her mortgage. She was described as the sole caretaker for her husband, who has colitis. She herself suffers from diabetes and other ailments. On a guess, I would say she was desperate and that there is something heart-rending about that desperation and the corner she felt herself to be backed into.

In Dallas, in a story not yet concluded, an unknown number of men shot up police headquarters at about 1230 a.m. Saturday (today). One suspect was said to be angry that police had taken his child from him and accused him of being a terrorist. It's a bit up in the air as I write, but the bullet holes and simplistic brazenness of the attack likewise smell like desperation to me ... if not quite so compelling as Poreda's actions.

No doubt there are others who are far more mature and world-savvy than I am, but I find something wrong with the desperation individuals can feel when set side by side with the shot-cuff arrogance of those who tack wars and other depredations on top of simple human difficulties. Isn't there enough so that the burdens can be shared and ameliorated?