Yesterday, in search of a few alpha waves, I was tooling around the TV channels and came to one that was running a documentary called, "The Armstrong Lie." And somehow I got stuck. 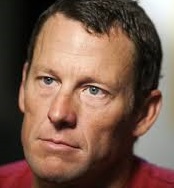 I don't care much about professional bike riding and its various phenoms, but somehow the tale of this seven-time winner of the Tour de France who was later stripped of his medals and banned from the sport held me fast. It wasn't the use of "performance-enhancing drugs" that kept me glued: It was the utter attractiveness and human-ness and tale of a man who lost whatever grasp he had had on something resembling a moral compass...

Where no one has a moral compass, where the lies are part of the very fabric of the presentation and where everyone closes their eyes with a will, wasn't Armstrong right to suggest, implicitly and explicitly, that his case was hardly out of the ordinary except to the extent that he kept being the spot-light winner? He wanted to look good and he did look good and there were plenty of people willing to allow him his laureled place in the sun.

Armstrong was clearly dedicated to his sport. He was passionate. He worked his ass off. He walked the talk ... mostly. The fact that he was pretty and well-spoken didn't hurt. But somehow he got lost along the border between dedication to the sport and dedication to himself.

And that was what held me. It's not just high-flier politicians or athletes or businessmen or religious leaders who set out by taking the issue at hand and working hard to improve or shape it and then slowly, as success accrues, begins to feel they deserve accolades and credit. It is they who become the focus of what was once a pretty serious issue.

I can't say how sick to death I get of those who take up a cause and then expect applause for their involvement and virtue and hard work. "Right!" I want to say. "You're terrific ... now can we get back to the issue?" It isn't just the high-flying sociopaths ... there's also the small, day-to-day conflations that nag.

Perhaps someone can invent a time-out room where those who ostensibly have a good cause but are possessed of an even bigger need to be noticed can retire and recite:

I love myself
I think I'm grand.
I go to the movies
And hold my hand.
I put my arm
Around my waist.
And when I'm fresh,
I slap my face.

A time-out room built just for me.
Posted by genkaku at 7:15 AM