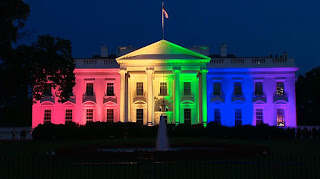 One of the adult difficulties about struggling for an envisioned future is that success immediately falls into the past. What person, spiritually-inclined or otherwise, foresees a brighter tomorrow living a life in a dimming yesterday? It would be a fool's errand, as anyone who dotes or relies on his or her own past can tell you.

Here in the U.S., yesterday's Supreme Court decision making same-sex marriage the law of the land is a case in point. Locally, I cannot help but wonder if that decision will mean that my home town will no longer hold its annual "Gay Pride Parade," a celebration that I always found both understandable and a bit sketchy since there was no similar "Straight Pride Parade" to bring a wider meaning to the matter.

But my local concerns don't really mean much. What interests me is the struggles and tears and frustrations and efforts that led up to the decision that is likely to face more challenges. I dislike prejudice or religious conviction that shuts out or shuts down or legislates one conviction at the expense of another when it comes to personal matters.

Gawd, what a struggle! I cannot know the half of it and yet the half I know seems heroic, though I cringe at the word. And yesterday, there it was -- a decision that in large measure spelled "success." How long had anyone slaved or hoped or prayed for such a day?! Legal rights underpinning what can be caring or careless relationships ... you know, the relationships anyone might have.

Up-hill, up-hill, up-hill -- fighting for a more equitable future. The froth-meisters may jump in here and do a jig about the trials ahead, but it's basically self-serving. In a very real sense, what the Supreme Court did was to proclaim victory ... and success.

Success resides in the past. People live in the present.

Imagine that: Struggling in the present so that in future you could live in the past. Am I wrong or is that devoutly screwy?

I guess I think there is some reason to recalibrate the ways in which "success" might be viewed or longed for or adored.

Yes, you won the race.

You made it into heaven.

Living in the past is not a happy or sensible pastime, do you think?