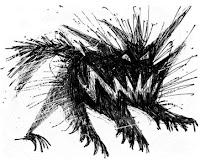 I suppose it is as well that it is pouring-down rain here today. That means I don't have to get out and do the lawn my son said he would mow and then, when I asked him when he was going to do it, said it was already done: He had "given it a pass" with the lawnmower and seemed surprised that I was surprised the work had been done. I walked out to take a look and sure enough, whatever had been done left a lot to be desired. What sort of person lays claim to accomplishment when things are so clearly unfinished? If you can't do the little stuff, why should anyone entrust you with the big stuff? Because you're kool? Bite me!

And then he added some icing to my cranky cake: "If you want it done, hire a landscaper." If there were a line calculated to light my NASA-liftoff fires, that was it. What sort of man cannot even mow his own lawn or, when doing it, make an honest attempt to do it well?! And then, to top it off, cannot acknowledge a piss-poor job -- opting rather to self-congratulate and lounge in the notion that if something breaks, all you've got to do is go out and buy another one.

Well, it's raining today, so I cannot get out and do what my body no longer can do well or easily ... clean up behind someone who claims insouciant accomplishment. Oh shit ... another mindless twerp. I may drop dead doing it, but when the rain stops, I will get out and, resentfully, do the work another claimed to have accomplished.

I am allowing my injustice-collecting mind to run its course. If I did anything else, it would simply puff up like a blister that then sagged into somnolent forgetfulness as time passed ... but never really got its day in court and thus dragged on the heart and mind.

And while I am in the business of being cranky -- of raining on whatever parade I might otherwise play music for -- my son has taken to a socially-acceptable piece of verbal bullshit that would better be left to the other smug assholes out there: "It is what it is."

I don't mind the sentiment, which is clearly true, but I do mind the mounting evidence that those using this get-out-of-jail-free card have never taken the trouble to consider:

Failure to make that effort means that there is a comfortable and comforting nest that others will allow and therefore it's OK if I allow it as well ... and thus can get on with my self-servings and not be inconveniently interrupted.

Well, in the morning rain, with a good head of cranky steam percolating, my only request is, "Stay the fuck away from me!"

Who knows if I will be able to finish the column I have promised for this coming Wednesday. I will try my best. With any luck, it won't have too many weeds.

Oh well, I guess I shouldn't get my knickers in a twist: It is what it is and if it turns out badly, I can just hire some other writer.
Posted by genkaku at 6:24 AM