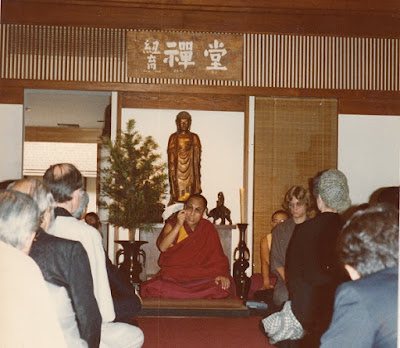 To revisit the past properly, it helps if there are cobwebs. And cobwebs there were this morning as I ventured into the demi-darkness of a basement-seldom-visited. My friend and former Zen buddy Frank had asked if I had any photos of the time the Dalai Lama visited the Zen center the two of us once patronized. I knew I had the photos, there in the past, there in the basement, there among the cobwebs betokening a misty, wispy once-upon-a-time. The cobwebs clung to me. They tickled as I looked through old photo albums. Some small part of me feared (or was it "longed?") that if I looked at the pictures I might somehow, Alice-like, fall down the cobwebby rabbit hole and be consumed by the past.

In the end, there they were -- photos of Sept. 8, 1979. Not as good as my mind remembered them, but good enough for documentation. The schedule called for a morning session at which all comers, including members of our zendo, would receive a talk in the morning. In the afternoon, the Dalai Lama would address whatever part of the Tibetan community from around New York City and its environs might show up. I was present for both sessions. While my practice was Zen Buddhism, it was the Tibetans who stirred my heart and mind.

The Zennies were largely seeeerious. Dour. Silent. Tight. Me too.

The Tibetans bubbled and laughed and and pushed and shoved and brought cans of Sprite and chewed gum and were brightly dressed ... not to mention being probably the most beautiful people in the world in my eye. Lord, they were lovely!

No doubt the Dalai Lama had some lasting words to say that day, but as usual with lasting words, they didn't last with me. What lasted, as I helped people find a seat or showed them where to put their shoes or pointed to the bathrooms, was a single incident and a wink.

The single incident was that of an elderly Tibetan woman who had lined up with others to give the Dalai Lama a white scarf that he put first around his neck and then took it off and put it around the giver's neck. Each of the givers bowed deeply, but the old woman did a full prostration on the floor to show her love and devotion. It was possible for her to get down on the floor, but getting up got the best of her -- she couldn't do it. Without missing a beat, the Dalai Lama saw the difficulty and bent down and gently helped her up ... as naturally as you or I might. It was nothing, really, and yet of all the things that happened that day, this small act was really something ... plain as salt and ... kind.

And then, as the Dalai Lama walked up the central aisle of the zendo as he prepared to depart, I stood in front of him, perhaps 15 feet away, and backed up, snapping pictures all the way. This small dance in which he advanced and I retreated proceeded until I ran out of flash, lowered the camera and just watched him approach.

We looked at each other.

I never did find the rabbit hole.
Posted by genkaku at 10:13 AM