another nominee for high office 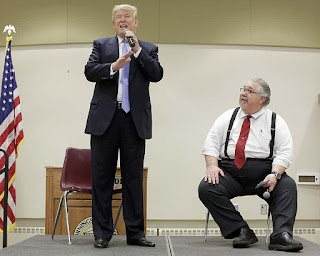 Sometimes it seems logical, if not imperative, to overlook and under-appreciate segments of America...


Sam Clovis, who has been nominated by Donald Trump to be the department of agriculture’s top scientist, previously ran a blog where he called progressives “race traders and race ‘traitors’” and likened former president Barack Obama to a “communist” and a “dictator”.
Clovis, previously a college professor and radio talk show host in Iowa, wrote the blog for his show Impact with Clovis. The website has been taken down but is archived.

The Department of Agriculture's "top scientist" sounds like a serious and occasionally pivotal role. Sam Clovis sounds loud, but not substantive ... like his wannabe boss, I guess.
Posted by genkaku at 6:57 PM