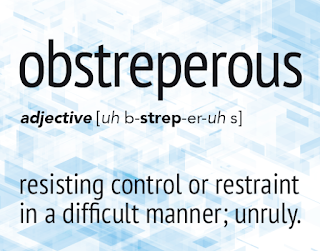 "Obstreperous" is probably as good an adjective as any to describe an active mind. Where the mind is capable of saying "yes," it is also capable and aware that such a "yes" relies on a "no." Anyone who has had kids knows a thing or two about obstreperousness, undisciplined behavior and thought.

But kids are one thing and artificial intelligence is ... "another?"

BEIJING/SHANGHAI (Reuters) - A pair of 'chatbots' in China have been taken offline after appearing to stray off-script. In response to users' questions, one said its dream was to travel to the United States, while the other said it wasn't a huge fan of the Chinese Communist Party.
The two chatbots, BabyQ and XiaoBing, are designed to use machine learning artificial intelligence (AI) to carry out conversations with humans online. Both had been installed onto Tencent Holdings Ltd's popular messaging service QQ.
The indiscretions are similar to ones suffered by Facebook Inc and Twitter Inc, where chatbots used expletives and even created their own language. But they also highlight the pitfalls for nascent AI in China, where censors control online content seen as politically incorrect or harmful.

Poor old China, land of a profound and enriching culture -- China would love to keep up with the computer advances of the day, but not all the advances of the day. It reminds me of a deeply-committed Christian family that will allow a broad education ... but not too broad.

What a conundrum. And not so unusual at any age: Who will travel long and hard, weep tears and bellow with laughter, in a quest for some balanced appreciation ... only to arrive at a point where contrarian assertions must either be accepted and investigated or locked tight in some room? The mind may know that the story is far from complete, but the delight in an incomplete story is not to be dismissed. Trading a fuller picture for a sense of relief and relaxation and an orderly structure ... it makes hypocrites of us all, I imagine.