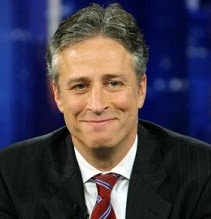 Jon Stewart, who guides TV's ersatz-news on "The Daily Show," announced last night that for unspecified reasons in an unspecified future, he would be leaving the show.

Executives are scrambling to find a replacement, but a 'replacement' will never be found ... it's just more pablum group-think. Stewart, 52, was/is a one-off and what those executives need is another one-off, something outside the group-think, money-making box. It is outside their track-record capacities, as comedian Stephen Colbert has proved with his one-note, self-referential sketches.

The stories detailing Stewart's departure all refer to a younger generation's reliance since 1999 on his wry, skewering approach to current events. I am not one of the younger generation, but my reaction to his announcement was a sense of serious loss: Ooooof!

Stewart's essays and monologues took the news business to task for its slow slide into agitation and propaganda and entertainment -- the declawing of a news approach that has accepted "embedded reporters" and proved itself willing not to ask hard questions of those who threatened to cut reporters off from central political and business leaders.

The pussification of news is serious and Stewart pointed it out over and over again. He asked out loud the questions that reporters might once have asked internally ... isn't there a contradiction between what is said and what is done? This is a question an audience might likewise ask. Jon Stewart was their/my outlet... an encouragement to think. The laughter -- and there has been plenty of that -- cut a hole in the solemnity without detracting from the seriousness.

But I can imagine he would be tired and, like all who are good at what they do, painfully aware of the fact that he was beginning to sound a little too much like Jon Stewart. That, and the fact that the avalanche of pussification pressure is unremitting. Can one man hold back the night? Stewart took a swing at it and connected on a number of occasions, but never hard enough to revise the course of pussification and mediocrity of thought.

Stewart is bright, witty and personable. But there's no fitting ten pounds of shit in a five-pound bag. Funny juxtapositions are a wonderful way of drawing attention -- though not for the pussified who imagine Stewart was not goring their ox -- but then ... but then ... an awful lot of humorous things can become serious, as for example the U.S.-backed death tolls, the legislation that nurtures poverty, a legal system shoe-horned into a secret court (FISA and its expanded powers) and other depredations.

I suppose I should be happy at Stewart's coming instead of bemoaning his departure. But ... well, I bemoan anyway. A gaggle of yes-men does not strike me as representing "freedom of the press" or a nurtured nation.