Before Edward Snowden, there was the Citizens’ Commission to Investigate the FBI. In 1971, eight anti-war activists broke into the FBI office in Media, Pennsylvania. Among them were John and Bonnie Raines frequent anti-war protesters and the parents of three kids.

Yesterday, on the car radio, I listened to part of an interview with a couple who were part of the eight-person team who planned meticulously and then executed the theft of FBI documents. Here's the entire interview.

There was something uplifting about the thoughtful, moral positions they took. In hindsight, their efforts are burnished and patriotic in the best sense of the word. But at no time during the part of the interview I heard did either husband or wife play the righteousness card. What they did was what they did. They took responsibility then (making arrangements to have someone take the kids if they got caught, eg.) and they take responsibility now. And there was something upright and thoughtful in their delivery. Sure, they were activists, but that was their responsibility. If they want my applause, I will certainly give it, but I have a hunch they are not on the applause-o-meter circuit.

One small snippet of the interview hangs in my mind like a case of bad breath. After the theft, they offered the stolen documents to three newspapers -- the Washington Post, the Los Angeles Times and the New York Times. Each newspaper faced a quandary: What do you do with stolen documents even when they are clearly real? I can't remember, but I think the 1971 break-in, theft and subsequent offering to news outlets may have been the first.

Only the Washington Post decided to run with the ball -- and that against the advice of counsel. The other two, either by their own judgment or by a judgment based on the government's phone calls hollering "stop the presses," did not... until after the Washington Post took the plunge.

And as I listened to the radio, it occurred to me, not for the first time, that the New York Times with all of its thoroughness and care and accolades, really was a practitioner of Smokey The Bear journalism ... informative, perhaps, but unwilling to protect a nation it claimed to serve. I have seen its sonorous cadences in other instances (relegating questioners of Israel's activities to lesser roles in the hierarchy of news stories on tap, eg.) and can't help being irritated by the righteousness passed off as objectivity. On balance, the newspaper may do more good than harm ... but the parental, quasi-cuddling stop-forest-fires approach sticks in my craw. 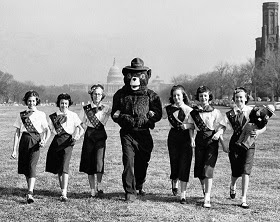