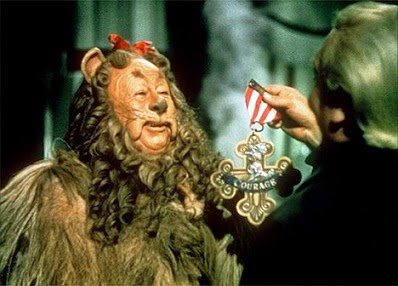 NBC news anchor Brian Williams has gotten himself into hot water by claiming he was once in a helicopter hit by an RPG (rocket-propelling grenade) over Iraq. It happened 12 years ago and suddenly, with the testimony of those who were on the scene at the time, Williams' tale has excited words like "misremembered" and "lie" and a "betrayal of trust."

The fiercest reaction to the Williams story, however, has come from online conservatives. Many conservative writers have accused Williams of "stolen valour" - a charge levelled at individuals who make false claims of war heroism in order to bask in the resulting adulation and privileges. They contend that the episode has permanently damaged Mr Williams credibility and should lead to his resignation.

"Stolen valor" -- now there's a phrase that makes me pause. You sort of know what it means because anyone who has worked in an office has seen the boss claim credit for what his workers have actually done. Or who hasn't heard some spiritual salesman quoting some late-great guru or text and, by implication, laying claim to a wisdom s/he only read about?

"Stolen valor" is disdained as shameful and mendacious in the very concrete instance of the battlefield.

And yet I cannot help but think of the politicians who wear American-flag lapel pins and praise "our hero troops" and thereby arrogate to themselves a heroism and patriotism that is woven out of whole cloth. Their public praise fairly oozes with a caring and zeal that no one calls out. When those doing the praising have not partaken of the fear and anger and love and wounds of the battlefield, how is their idle chatter not likewise "stolen valor?" When their children have managed to avoid taking up arms and perhaps suffered irreparable wounds within or without, how is this NOT "stolen valor?"

If Brian Williams' lies were the worst of "stolen valor," I think we'd all be in the pink.