too scared to relax

As a newspaper reporter in a time when people read newspapers, there would be days on which I would be responsible for some locally-big, page-one news story. The story would be "breaking," meaning that aspects and results would be continuing even as the reporter wrote the story and met the deadline that cut off additional information: The paper needed to be wrapped up and shipped off to customers.

The nearer the deadline, the greater the stress. Sometimes calculations came down to minutes: Gather as much information as possible, return to the office and write the story with the city editor (the person charged with overseeing the resulting article) breathing down your neck.

Over time, I learned a little of how to handle the three-minute, page-one story: Gather the information at the accident scene or fire or political bombshell; return to the office; check the clock and then, with under five minutes to go before deadline, GET A CUP OF COFFEE and only then sit down and start typing furiously. 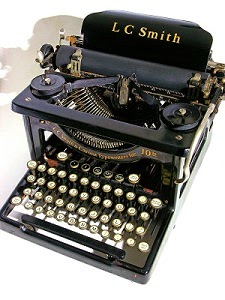 A typewriter was a hand-operated machine that preceded the alleged efficiency of the computer. In the newsroom, its use was almost invariably accompanied by a cup of coffee or surreptitious scotch, cigarette and cigar smoke in the air, and some loud and choice cussing. Writing a breaking story was pedal-to-the-metal work -- a furious dash to any breaking-news finish.

The story never was perfect and yet reporters often strove for perfection -- a complete and balanced and coherent story -- over and over again. Some were better than others. Whatever the success, it always implied failure: Human stories are never complete and words cannot ever truly convey them.

But within those parameters, diversion was crucial to the quality and coherence of the story ... a rest period in which the mental muscles relaxed. Three minutes to deadline? Take at least one for a cup of really bad office coffee.

Rest and relaxation may be anathema to work/money-addicted employers intent on squeezing every last drop of 'productivity' out of employees, but where they cannot factor in the literal financial benefits of relaxation, I think they are falling down on their job.

Now, it seems, Japan, a nation full of workaholics, is considering making a law that would compel employers to make sure their workers take vacation days and otherwise unwind.

Legislation that will be submitted during the parliamentary session that began Jan. 26 aims to ensure workers get the rest they need. In a break with past practice, it will become the legal responsibility of employers to ensure workers take their holidays....
Part of the problem has been that many people fear resentment from co-workers if they take days off, a real concern in a conformist culture that values harmony....
About 22 percent of Japanese work more than 49 hours a week, compared with 16 percent of Americans, 11 percent of the French and Germans, according to data compiled by the Japanese government. South Koreans seem even more workaholic, at 35 percent.

"Productivity" ... and the law of diminishing returns. On the one hand everyone would like to sell more widgets and is therefore keen to have workers work harder. On the other hand, if the work load gets to big -- as for example by not clearly defining the responsibilities of individual workers -- then corners will need to be cut and mediocrity will gain a foothold. Customers will only put up with so much mediocrity before they go elsewhere. And once they're gone, it is hard to win them back ... i.e. 'maximize profits.'

In Zen Buddhism, there is a saying: "A day without work is a day without eating." At a mundane level, this is a stab at the heart of social conscience, a quid pro quo of individual and social existence. Eating, obviously, is crucial to life. But without examining what it is that constitutes "work," how could anyone be other than a candidate for the ulcer farm putting out a mediocre product? How could anyone adequately know what work is if s/he didn't likewise know what relaxation was? Isn't this a package deal -- the one tending on the other? Could the richness of spiritual life be much more than a mediocre bluff if there were no ability to live comfortably in a world that ignored what passes for spiritual endeavor?

Sure, there are listless, lazy fuck-offs in any endeavor, but I'm not sure which is more debilitating to success -- the laziness that seeks to skirt the effort required for honest reward or the lock-step fire and brimstone of 'productivity.'