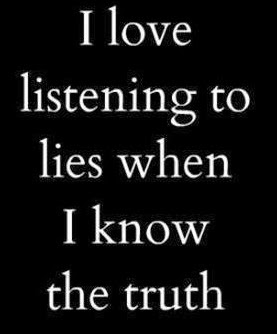 Reading yet another knicker-twisted story about NBC news anchor Brian Williams and his misrepresentation of a war adventure in Iraq 12 years ago, I am irritated anew by words like "misspoke" and "misremembered." What irritates me most is that they detract from the juicy and useful world of "lying."

It's sort of like the oh-so-coy mealy-mouths who substitute the word "issue" for "problem" or hospitals which cannot seem to perform an "operation" when a "procedure" dovetails so much more nicely with insurance-company-speak.

If you listen to ethical or religious of philosophical talking heads, anyone might imagine that lying is considered a naughty or anti-social activity. And the volume of critical invective is turned up when institutions or individuals cloak themselves in trustworthiness and then get rightly accused:

It's heady stuff. Whether within or without, virtue oozes from the accuser's pores.

OK ... no one likes to be lied to or to be accused of lying.

At a serious level -- as opposed to a superficial, if fiery, one -- I think the answer lies in a single fallacious premise and that premise is imagining that anyone could tell the truth. The facts may demonstrate over and over again that "the whole truth and nothing but the truth" is dubious when it's not busy being ludicrous, but that doesn't seem to alter or revise the as-from-on-high premise.

Within and without ... same stuff, different day ... lying gets a bad rap... and "the truth will set you free." I know the truth and you know the truth, but we seem to butt heads when it comes to agreeing about the truth. And/or, the truth dwindles and morphs into some other, more truthful truth which puts the lie to the truth that preceded it.

It is the premise of 'truthiness' that could use a bit of examination. And with that examination, perhaps the twist in my knickers and yours could be loosened.

I guess I just don't like lying about lying.

Or something.
Posted by genkaku at 8:43 AM