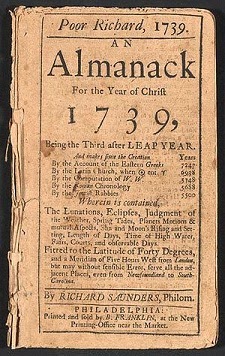 Woke and rose at 3:30, before I had had a chance to consult the clock. By the time I did see it, I was already into a getting-dressed-getting-coffee mode and some ironic voice took refuge in Ben Franklin's 18th century, "early to bed and early to rise makes a man healthy, wealthy and wise."

Bill McKechnie, an longtime friend now dead, once revised this Poor Richard's Almanack touchstone to read, "early to bed and early to rise and you never see any of your friends." McKechnie's wit lay not just in the wry laziness that countered Franklin's Calvinistic hard work and uprightness, but also in the fucked-up rhythm. It made me smile at 3:30: How many of my friends were up and running at 3:30, an hour when the hard-working are often asleep? Well, at least McKechnie is getting his zzzzz's and I am anything but a hard-worker.

Almanacs in the 18th century were apparently as popular as they are today, being then as now a compendium that offered "a mixture of seasonal weather forecasts, practical household hints, puzzles, and other amusements," according to Wikipedia.

Outhouse pastimes, in short, but also a summing up of vast and desirable philosophies.

Hard work is generally the measure of anything worthwhile, but the notion that good results could be attained without a good sweat persists in the mind and deserves correction. A nutshell is often useful and easier than investigating the philosophy it represents.

It's interesting who picks up what nutshells around in a mental filing box. These silver-tongued bon mots are not exactly serious but neither are they entirely silly. They are not exactly important, but neither are they unimportant. For example, I grew up remembering Ben Franklin and also liking Beatles member John Lennon's "life is what happens while you are making other plans."

Like others, I imagine, sometimes I am willing to investigate the wit and wisdom that comes off my own lazy-bones tongue. But sometimes I just make an utterance as a dismissal -- a walking stick I can lean on in place of actual work: Here is something true, so there's no point in breaking a sweat. "Love they neighbor as thyself" is nifty enough so that, well, I can go back to bed and let others eat my virtuous dust.

I wonder what touchstones others are sewing or have sewn into their tapestries these days. It wouldn't surprise me to think that someone didn't know who the hell Ben Franklin was, let alone his almanac. Still the tendency to distill and rely on and sometimes investigate nutshells is hardly dead, I imagine.

So what are the touchstones of today? I grew up with mine; what are my children growing up with? What small nutshells litter their forest floor? Under what banners do they alternatively lounge and investigate, rely on and implement?

Maybe because it's early and I am vaguely surly, all I can think of is