super moments in the Super Bowl 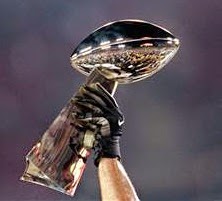 With almost no time remaining in the Super Bowl yesterday, first there was a spectacular reception by the Seattle Seahawks and then, unbelievably, there was a game-winning interception by the New England Patriots. The final score was 28-24.

It's nice to watch a much-touted game and have it turn out to be a pretty good game. Too often what is advertised as the "best" or the "biggest" or the "first-est with the most-est" turns out to be eyewash and hype that cannot compare with less-touted efforts ... it's frequent enough to make anyone steer clear of the alleged winners.

When I was a reporter, it didn't take long to figure out that if you wanted to know what the governor was doing, you never tried to talk to the governor ... always talk to someone further from the spotlight who was actually doing the work. Or, in the military, don't ask the general, ask the sergeant. Or in religion, don't consult the pope.

It was a good Super Bowl despite the feeding-frenzy hype.
Posted by genkaku at 7:31 AM