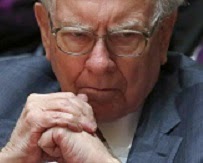 And, in the I-don't-understand-investment-ground-rules department, there is this today:


(Reuters) - Warren Buffett's Berkshire Hathaway Inc (BRKa.N) on Tuesday disclosed a 5 percent stake in agricultural equipment maker Deere & Co (DE.N) and said it shed a $3.74 billion investment in oil company Exxon Mobil Corp (XOM.N) as oil prices plunged.
The changes were among several that Berkshire made in its common stock investments in the fourth quarter, according to a U.S. Securities and Exchange Commission filing detailing the conglomerate's domestic equity investments as of Dec. 31.
Berkshire began accumulating the bulk of its 17.1 million-share stake in Deere, worth $1.51 billion at year end, in the third quarter of 2014, but had not previously disclosed it. The SEC often lets Buffett quietly accumulate large stakes to deter copycats. (Emphasis added)